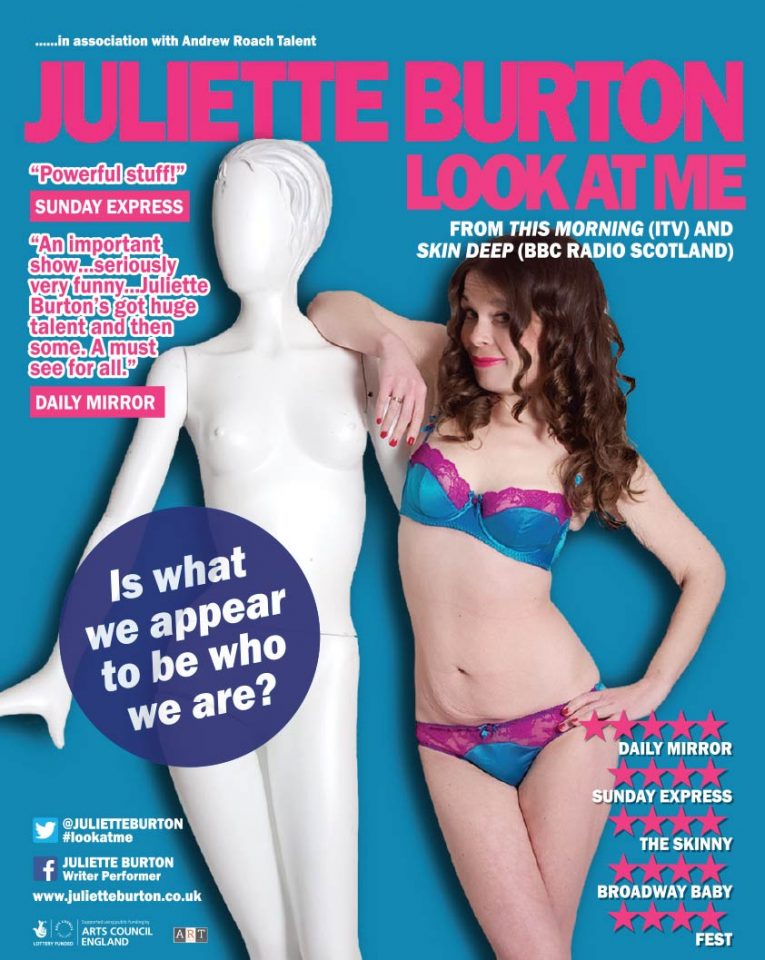 What will you see if you Look At Me?

Award-winning performer Juliette Burton’s been fat, thin and everything between. Now, she’ll change even more!

From dressing sexily to wearing the hijab, being male, obese, old and nude: can changing our outsides change who we are on the inside? And is who we appear to be who we are?

Look At Me informs Juliette’s comedic body confidence talk available to book. INTERESTED IN BOOKING THIS TALK? Get in touch via info@julietteburton.co.uk

The Look At Me music video was created by the incredible

Produced and composed by Frankie Lowe at Castaway Audio

Check out Frankie’s other work here

Lyrics and vocals by Juliette Burton

All presentation photography – the timelapse video and all advert images – by ALEX BECKETT who generously donated his time and talent.

(a much better way to do so than buying magazines).

All the ‘Look At Me’ magazine models are perfectly imperfect real women:

Ros – who advertises CONFIDENCE in the show – is a beautiful, inspiring woman who – despite her cystic fibrosis – makes beautiful hats and stunning bridal wear for a living. Like her Facebook page.

Lillian – who advertises COURAGE in the show – became a professional model after a difficult break up that shook her confidence. She was a runner up at The National Vintage Awards 2014. Like her Facebook page.

Emma – who advertises HONESTY in the show – like Juliette – battles mental health problems.  Emma has BDD, OCD, and a history of self-harm. She is also an incredible writer and is working with Juliette on a book proposal of ‘When I Grow Up’.

Huge thanks to all the show’s supporters.

“An important show…Seriously very funny… Burton’s got huge talent…and then some. A must-see.”

“A future star… Someone call a TV producer because Burton’s ready for a bigger audience.”